A "constant" is a number, character, or character string that can be used as a value in a program. Use constants to represent floating-point, integer, enumeration, or character values that cannot be modified.

The following table lists the suffix that defined by ISO, also implemented by Microsoft. You can find it usage in variable declaration, the standard input function (scanf()/scanf_s()) and standard output function, printf()/printf_s()). You will find the examples in theC lab worksheet practice.

No white-space characters can separate the digits of an integer constant. These examples show valid decimal, octal, and hexadecimal constants.

The limits for integer types are listed in the following table. These limits are defined in the standard header file LIMITS.H. Microsoft C also permits the declaration of sized integer variables, which are integral types of size 8-, 16-, or 32-bits.

If a value exceeds the largest integer representation, the Microsoft compiler generates an error.

The following table summarizes the storage associated with each basic type.

Microsoft C features support for sized integer types. You can declare 8-, 16-, 32-, or 64-bit integer variables by using the __intn type specifier, where n is the size, in bits, of the integer variable. The value of n can be 8, 16, 32, or 64. The following example declares one variable of each of the four types of sized integers:

A floating-point number (x) is defined by the following model:

Limits on the values of floating-point constants are given in the following table. The header file FLOAT.H contains this information.

Note that the information in the above table may differ in future implementations.

Any member of the source character set except the single quotation mark ('), backslash (\), or newline character

The single-quote', the double-quote ", the question-mark?, the backslash \, and arbitrary integer values are representable according to the following table of escape sequences:

In ANSI C, the expressions that define the value of an enumerator constant always have int type; thus, the storage associated with an enumeration variable is the storage required for a single int value. An enumeration constant or a value of enumerated type can be used anywhere the C language permits an integer expression.

The value 0 is associated with saturday by default. The identifier sunday is explicitly set to 0. The remaining identifiers are given the values 1 through 5 by default.

In this example, a value from the set DAY is assigned to the variable today.

To explicitly assign an integer value to a variable of an enumerated data type, use a type cast:

This cast is recommended in C but is not required.

This declaration can also be specified as

The source character set of C source programs is contained within the 7-bit ASCII character set but is a superset of the ISO 646-1983 Invariant Code Set. Trigraph sequences allow C programs to be written using only the ISO (International Standards Organization) Invariant Code Set. Trigraphs are sequences of three characters (introduced by two consecutive question marks) that the compiler replaces with their corresponding punctuation characters. You can use trigraphs in C source files with a character set that does not contain convenient graphic representations for some punctuation characters.

The following table shows the nine trigraph sequences. All occurrences in a source file of the punctuation characters in the first column are replaced with the corresponding character in the second column. The Trigraphs also defined by ISO/IEC 9899:1999.

C and C++ programs consist of one or more source files, each of which contains some of the text of the program. A source file, together with its include files (files that are included using the #include preprocessor directive) but not including sections of code removed by conditional-compilation directives such as #if, is called a "translation unit."

The following list describes the phases in which the compiler translates files:

The compiler issues warnings or errors during phases of translation in which it encounters syntax errors. The linker resolves all external references and creates an executable program or DLL by combining one or more separately processed translation units along with standard libraries.

The implementation shall be able to translate and execute at least one program that contains at least one instance of every one of the following limits (ISO/IEC 9899:1999 (C99)):

You provide the linker with files that contain objects, import and standard libraries, resources, module definitions, and command input. LINK does not use file extensions to make assumptions about the contents of a file. Instead, LINK examines each input file to determine what kind of file it is.

LINK no longer accepts a semicolon (or any other character) as the start of a comment in response files and order files. Semicolons are recognized only as the start of comments in module-definition files (.def). LINK uses the following types of input files:

All the input files for the linker can be included using the Linker options for the command line compilation. Using the GUI VC++ IDE you can set it through the project setting (Project > Project_name Properties). 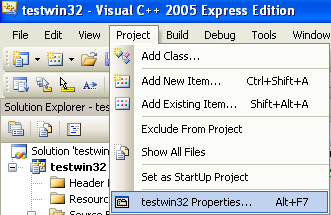 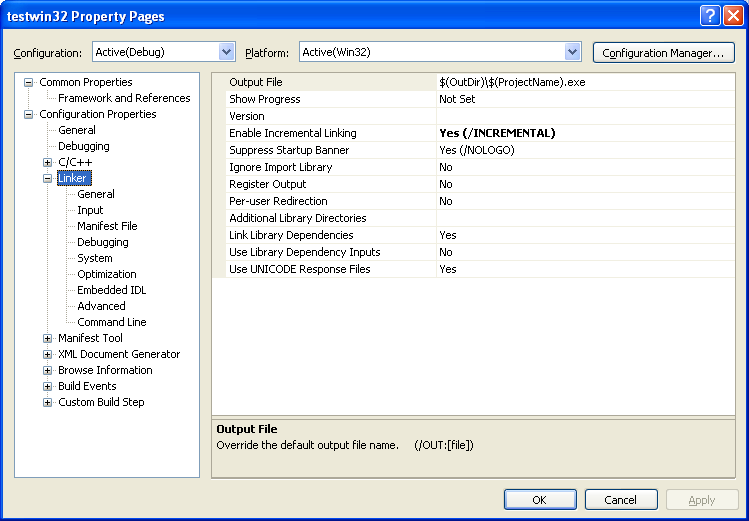 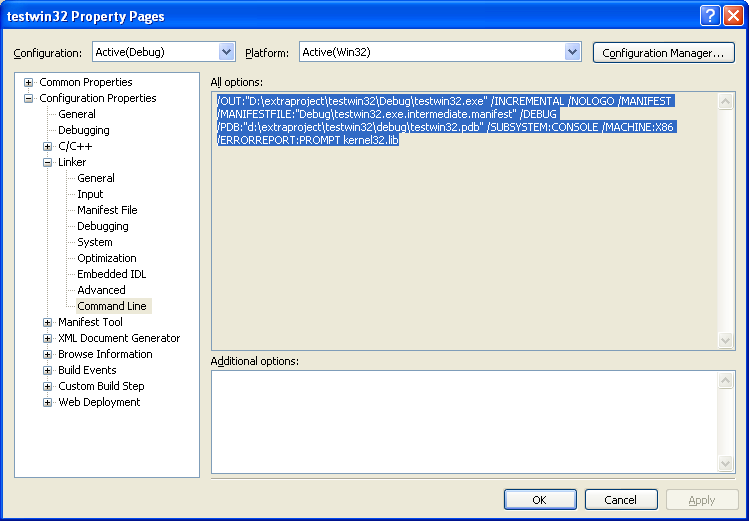 For the command line, to run LINK.EXE, use the following command syntax:

The arguments include options and filenames and can be specified in any order. Options are processed first, then files. Use one or more spaces or tabs to separate arguments. On the command line, an option consists of an option specifier, either a dash (–) or a forward slash (/), followed by the name of the option. Option names cannot be abbreviated. Some options take an argument, specified after a colon (:). No spaces or tabs are allowed within an option specification, except within a quoted string in the /COMMENT option. Specify numeric arguments in decimal or C-language notation. Option names and their keyword or filename arguments are not case sensitive, but identifiers as arguments are case sensitive. To pass a file to the linker, specify the filename on the command line after the LINK command. You can specify an absolute or relative path with the filename, and you can use wildcards in the filename. If you omit the dot (.) and filename extension, LINK assumes .obj for the purpose of finding the file. LINK does not use filename extensions or the lack of them to make assumptions about the contents of files; it determines the type of file by examining it, and processes it accordingly. link.exe returns zero for success (no errors). Otherwise, the linker returns the error number that stopped the link. For example, if the linker generates LNK1104, the linker returns 1104. Accordingly, the lowest error number returned on an error by the linker is 1000. A return value of 128 represents a configuration problem with either the operating system or a .config file; the loader didn’t load either link.exe or c2.dll.