well, they are just memory addresses!!

The C and C++ pointers programming abilities that should be acquired:

// value is a pointer to type float, and percent is an ordinary float variable.

// program to illustrate the basic use of pointers

// assigns the address of variable num to pointer point_one 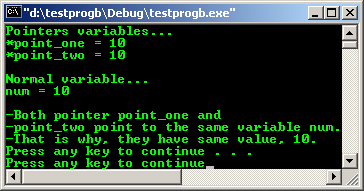 // declare a pointer variable named pter, where the

// data stored pointed to by pter is int type

// a basic pointer use

// declare and initialize an int variable

// declare a pointer to int variable

// you can use %p for the pointer memory address directly or

//%0xor%0X in hexadecimal representative instead of

// this is not an address lol!