My Training Period: yy hours. Before you begin, read some instruction here. 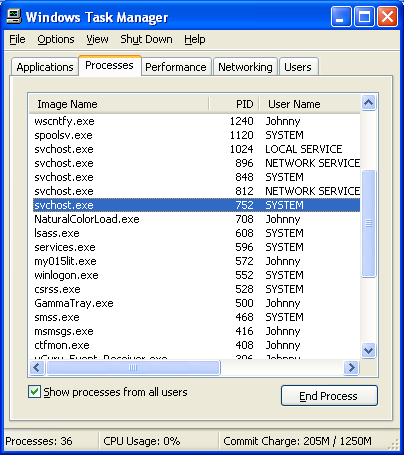 Windows Task Manager provides information about programs and processes running on your computer. It also displays the most commonly used performance measures for processes.  You can use Task Manager to monitor key indicators of your computer's performance. You can see the status of the programs that are running and end programs that have stopped responding. You can also assess the activity of running processes using as many as fifteen parameters, and see graphs and data on CPU and memory usage.  In addition, if you are connected to a network, you can view network status and see how your network is functioning.  If you have more than one user connected to your computer, you can see who is connected, what they are working on, and you can send them a message.

Programs that are running

The Applications tab shows the status of the programs running on your computer.  On this tab, you can end, switch to, or start a program.

Processes that are running

The Processes tab shows information about the processes running on your computer.  For example, you can display information on CPU and memory usage, page faults, handle count, and a number of other parameters.

The Performance tab displays a dynamic overview of your computer's performance, including:

Graphs for CPU and memory usage.  Totals for the number of handles, threads, and processes running on your computer.  Totals, in kilobytes, for physical, kernel, and commit memory.

The Networking tab displays a graphical representation of network performance. It provides a simple, qualitative indicator that shows the status of the network(s) that are running on your computer. The Networking tab is displayed only if a network card is present.  On this tab, you can view the quality and availability of your network connection, whether you are connected to one or more than one network.

The Users tab displays users who can access this computer, and session status and names. Client Name specifies the name of the client computer using the session, if applicable. Session provides a name for you to use to perform such tasks as sending another user a message or connecting to another user’s session.  The Users tab is displayed only if the computer you are working on has Fast User Switching enabled, and is a member of a workgroup or is a standalone computer. The Users tab is unavailable on computers that are members of a network domain.

For custom view, click the View menu → Select Columns... submenu as shown below. 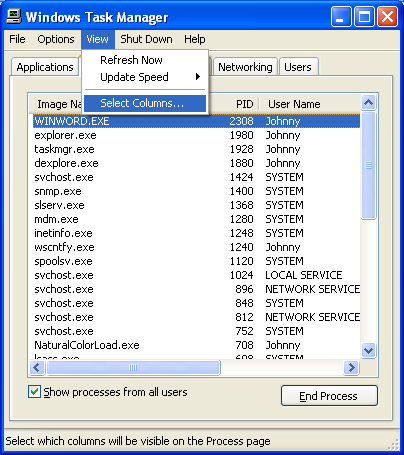 Tick and/or un-tick the required columns and click the OK button.

The following is an example of Task Manager with more columns displayed. 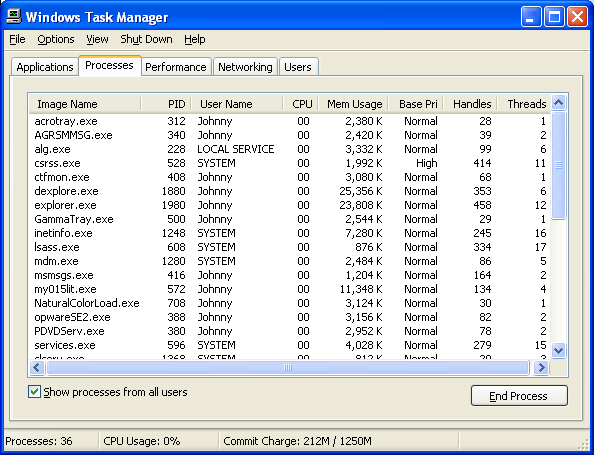 Each Windows’s process provides the resources needed to execute a program. A process has a virtual address space, executable code, data, object handles, environment variables, a base priority, and minimum and maximum working set sizes. Each process is started with a single thread, often called the primary thread, but can create additional threads from any of its threads. All threads of a process share its virtual address space and system resources. In addition, each thread maintains:

Microsoft® Windows® supports preemptive multitasking, which creates the effect of simultaneous execution of multiple threads from multiple processes. On a multiprocessor computer, the system can simultaneously execute as many threads as there are processors on the computer. Preempted  means a process is returning from kernel to user mode, but the kernel preempts it and does a context switch to schedule another process.

This method enables an application to have handles with different access rights. For example, Handle 1 might have "set" and "wait" access to the event, and Handle 2 might have only "wait" access. If another process knows the event name and has security access to the object, it can create its own event object handle by using OpenEvent(). The creating application could also duplicate one of its handles into the same process or into another process by using the DuplicateHandle() function. An object remains in memory as long as at least one object handle exists. In the following illustration, the applications use the CloseHandle() function to close their event object handles. When there are no event handles, the system removes the object from memory, as shown in the following illustration. 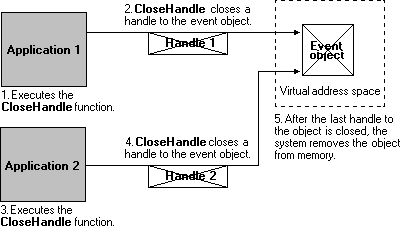 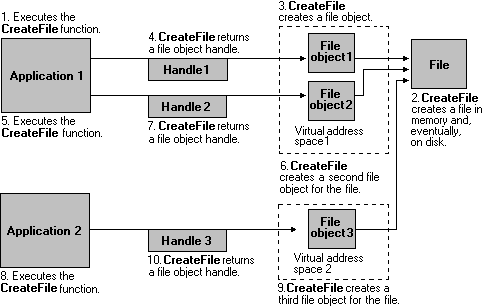 Only through duplication or inheritance can more than one file handle refer to the same file object, as shown in the following illustration. 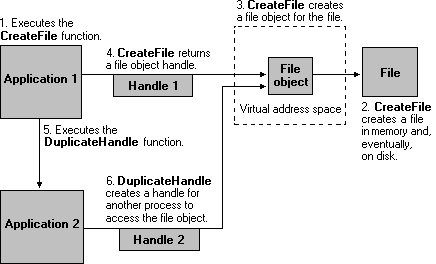 Multitasking means doing many tasks at the ‘same time’. For example, when preparing a document you may opening graphic program to edit and insert graphic into your document and opening spreadsheet to do some statistic calculation. At the same time, the operating system also doing many tasks at the background. As all the data need to be processed, they need to share all the system resources such as processor and memory. Hence, there need a proper control mechanism and management. A multitasking operating system divides the available processor time among the processes or threads that need it. The system is designed for preemptive multitasking; it allocates a processor time slice to each thread it executes. The currently executing thread is suspended when its time slice elapses, allowing another thread to run. When the system switches from one thread to another, it saves the context of the preempted thread and restores the saved context of the next thread in the queue.

The length of the time slice depends on the operating system and the processor. Because each time slice is small (approximately 20 milliseconds), multiple threads appear to be executing at the same time. This is actually the case on multiprocessor systems, where the executable threads are distributed among the available processors. However, you must use caution when using multiple threads in an application, because system performance can decrease if there are too many threads. From the process model views, all runnable software on a computer, including the OS itself, is organized into a number of sequential processes, or just processes for short.  As mentioned before, a process is just an executing program, including the current values of the program counter, registers and variables.  Conceptually each process has its own virtual processor.  In reality the real processor switches back and forth from process to process. In the following figure (a) we see a computer multitasking four programs in memory.  In (b) we see how this is abstracted into four processes, each with its own flow of control that is its own program control and each one running independent of the other ones.  In (c) we see that when viewed over an ample of time interval, all the processes have made progress, but at any given instant only one process is actually running. 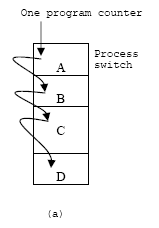 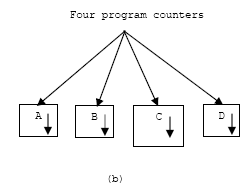 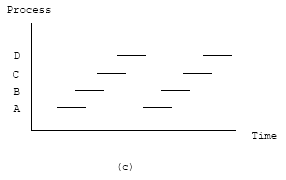 The system scheduler controls multitasking by determining which of the competing threads receives the next processor time slice. The scheduler determines which thread runs next using scheduling priorities.

Threads are scheduled to run based on their scheduling priority. Each thread is assigned a scheduling priority. The priority levels range from zero (lowest priority) to 31 (highest priority). Only the zero-page thread can have a priority of zero. The zero-page thread is a system thread responsible for zeroing any free pages when there are no other threads that need to run.

The following figure shows how to set the process priority through Windows Task Manager.  Under the Processes tab → Select any Image Name → Right click your mouse button as shown below. 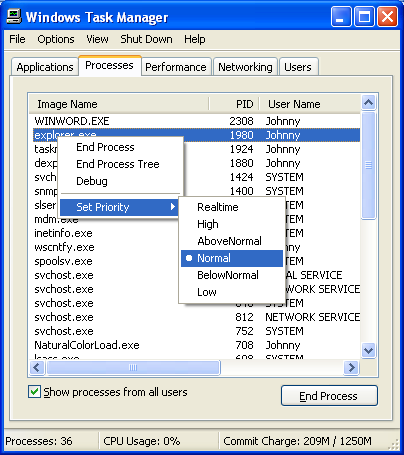 The priority class and priority level are combined to form the base priority (can be seen in Windows Task Manager as shown below) of a thread. 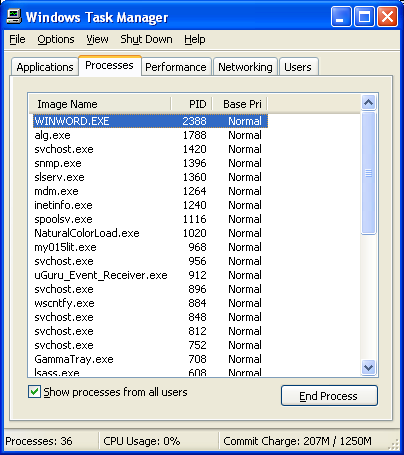 From Windows APIs, each process belongs to one of the following priority classes:

If several threads are set at high priority at the same time, the threads lose their effectiveness. The high-priority class should be reserved for threads that must respond to time-critical events. If your application performs one task that requires the high-priority class while the rest of its tasks are normal priority, use SetPriorityClass() to raise the priority class of the application temporarily; then reduce it after the time-critical task has been completed. Another strategy is to create a high-priority process that has all of its threads blocked most of the time, awakening threads only when critical tasks are needed. The important point is that a high-priority thread should execute for a brief time, and only when it has time-critical work to perform. You should almost never use REALTIME_PRIORITY_CLASS, because this interrupts system threads that manage mouse input, keyboard input, and background disk flushing. This class can be appropriate for applications that "talk" directly to hardware or those perform brief tasks that should have limited interruptions.

The following are priority levels within each priority class

All threads are created using THREAD_PRIORITY_NORMAL. This means that the thread priority is the same as the process priority class. After you create a thread, use the SetThreadPriority() function to adjust its priority relative to other threads in the process.  A typical strategy is to use THREAD_PRIORITY_ABOVE_NORMAL or THREAD_PRIORITY_HIGHEST for the process's input thread, to ensure that the application is responsive to the user. Background threads, particularly those that are processor intensive, can be set to THREAD_PRIORITY_BELOW_NORMAL or THREAD_PRIORITY_LOWEST, to ensure that they can be preempted when necessary. However, if you have a thread waiting for another thread with a lower priority to complete some task, be sure to block the execution of the waiting high-priority thread. To do this, use a wait function, critical section, or the Sleep() function, SleepEx(), or SwitchToThread() function. This is preferable to having the thread execute a loop. Otherwise, the process may become deadlocked, because the thread with lower priority is never scheduled.  To determine the current priority level of a thread, use the GetThreadPriority() function.