What are in this Module?

Abilities that supposed to be acquired:

There are two basic components of the access control model:

When a user logs on, the system authenticates the user's account name and password.  If the logon is successful, the system creates an access token.  Every process executed on behalf of this user will have a copy of this access token.  The access token contains security identifiers (SID) that identify the user's account and any group accounts to which the user belongs.  The token also contains a list of the privileges held by the user or the user's groups.  The system uses this token to identify the associated user when a process tries to access a securable object or perform a system administration task that requires privileges.

An ACL contains a list of access control entries (ACEs).  Each ACE specifies a set of access rights and contains a security identifier that identifies a trustee for whom the rights are allowed, denied, or audited.  A trustee can be a user account, group account, or logon session.  A logon session begins whenever a user logs on to a computer.  All processes in a logon session have the same primary access token.  The access token contains information about the security context of the logon session, including the user's SID, the logon identifier, and the logon SID.  The following illustration shows what will happen when a user log on to a system.  Keep in mind that the user is nothing because user’s credential such as his/her username and password was created in the system.  User’s credential just another Windows object. 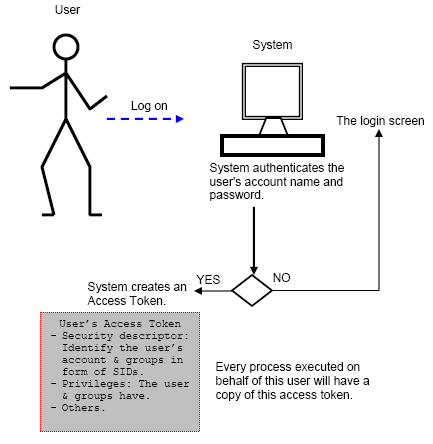 An access token is an object that describes the security context of a process or thread.  The information in a token includes the identity and privileges of the user account associated with the process or thread.  When a user logs on, the system verifies the user's password by comparing it with information stored in a security database.  If the password is authenticated, the system produces an access token.  Every process executed on behalf of this user has a copy of this access token.

The system uses an access token to identify user when a thread interacts with a securable object or tries to perform a system task that requires privileges.  Access tokens contain the following information:

A primary token is an access token that is typically created only by the Windows kernel.  It may be assigned to a process to represent the default security information for that process.  The impersonation token is an access token that has been created to capture the security information of a client process, allowing a server to "impersonate" the client process in security operations.

Every process has a primary token that describes the security context of the user account associated with the process.  By default, the system uses the primary token when a thread of the process interacts with a securable object.  Moreover, a thread can impersonate a client account.  Impersonation allows the thread to interact with securable objects using the client's security context.  A thread that is impersonating a client has both a primary token and an impersonation token. You can use theOpenProcessToken() function to retrieve a handle to the primary token of a process.  Use theOpenThreadToken() function to retrieve a handle to the impersonation token of a thread.  You can use the following functions to manipulate access tokens.

The access token functions use the following enumeration types.

An application cannot change the access control list of an object unless the application has the rights to do so.  These rights are controlled by a security descriptor in the access token for the object.  To get or set the security descriptor for an access token, call theGetKernelObjectSecurity() and SetKernelObjectSecurity() functions.  When you call theOpenProcessToken() or OpenThreadToken() function to get a handle to an access token, the system checks the requested access rights against the DACL in the token's security descriptor.  The following are valid access rights for access-token objects:

The following figure shows a simple the relationship between securable object (a folder) and security descriptor. 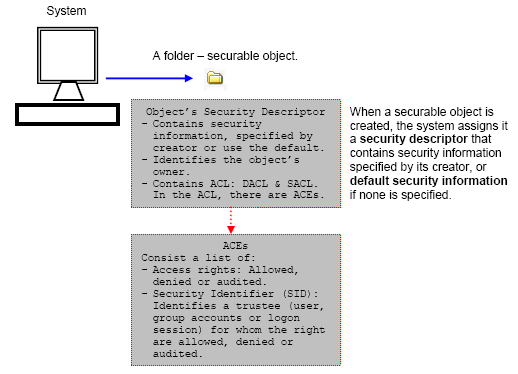